The Batignolles -Chatillon diesel locomotive was built by CAF in Beasain under patent of “Compagnie Batignolles-Chatillon”, in 1959. The locomotive, at first, ran in the Tauste-Sadaba-Gallur line since April of 1965.
This company needed to modernize its rolling stock. The Spanish government awarded one of the ten locos built as an output of the national rolling stock modernization plan. The company was later absorbed by FEVE. When the line was closed the loco was translated to the depot of “La Casilla” in 1970. From this date the serial number of the loco was 1207. Nowadays it keeps this number. Until 1981 it rendered service in the north line of FEVE, in Bilbao. Then FEVE translated the loco to Mallorca in order to participate in the Palma – Inca track renewal and the gauge change from the yard to the metric gauge. 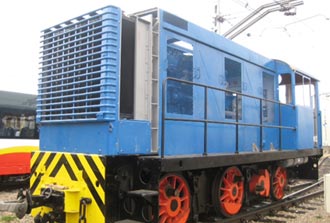