This railcar was built by “Wumag und Maschinenbau” in 1920 (Germany). Some of them were delivered to Portugal by Germany under the program for war reparations in order to compensate the damage during the First World War. This rolling stock never ran in Portugal, because the line was never built. In 1942 the Company of Trams and Railways of Valencia (CTFV) bought 24 cars and 6 motor of this type to Portugal. Then, Spain was isolated in Europe but it had good relations with the government of Salazar. The payment of railway equipment was made ​​with tungsten. Portugal exported it to England to build war materials to prepare the Second World War.
This railcar was, originally, a coach, but not a railcar. In the 50s the CFTV transformed this coach into a railcar, in the workshops of ” Pont de Fusta”. It has four electric motors of 200 KW each and OB33 SIEMENS type combiner. 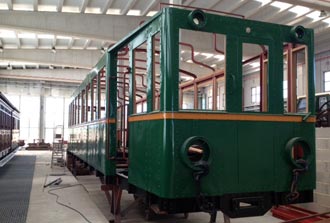